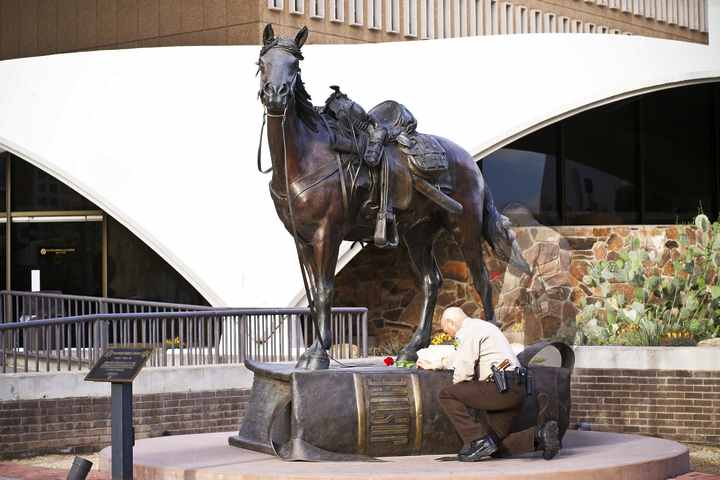 This sculpture is dedicated in humble tribute to those of the Sheriff's Office who have sacrificed their lives in service to the people and as an inspiration to present and future generations of Peace officers.

With unshod feet firmly planted on the book of Justice, a proud and determined horse, symbolic of the commitment of the Sheriff's Office, stands ever-vigilant and braced against the winds of adversity. The empty saddle is a mute testament to the brave rider who, steadfast in his resolve to serving the people, has fallen in the line of duty. Over the saddle horn hangs his pistol belt and Badge of Honor left as a legacy awaiting the next courageous soul willing, and ready, to mount up and ride for Truth and Justice in the dust of those who have gone before. This sculpture is dedicated in humble tribute to those of the Sheriff's Office who have sacrificed their lives in service to the people and as an inspiration to present and future generations of Peace Officers.

The Horse: A Spanish Colonial, renowned for its courage and hardiness, descended from the Barbs of the Conquistadors and bred by Father Kino at the missions he established from Mexico to California. Especially popular in Arizona around the turn of the century-alert for danger, yet also aware of the approach of his new rider.

Saddle: 1910-1920 H.H.Heiser, a favorite in Arizona including the Sheriff's and Arizona Rangers, with heart on breast collar and stirrup ties in remembrance of those who have fallen.

Slicker: Dauntless service through all kinds of weather.

Rifle/Lariat: Model 94 Winchester with 50 rifle cartridge loops in belt; 50 ft. of rope: the long reach of the law through Sheriff's Offices in all 50 states using force, if necessary, but peaceful means whenever possible.

Pistol/Belt: Model 1873 Colt. 45 SA with 12 pistol cartridges for the 12 months a year and 24 rifle cartridges for the 24 hours a day officers are on duty. Also, jury of twelve being the ultimate judge of guilt or innocence of the accused based on truth. Heart on holster over pistol in remembrance and to remind all that force must be balanced with compassion.

Saddlebags: Model 1904 U.S. cavalry surplus; hold the valuable safety and welfare of "US" the people of the county.

Canteen: Model 1898 U.S. Cavalry surplus; sustenance is derived from "US" the people of the county.

Bit: Model 1874 U.S. cavalry surplus; the County Sheriff is the only "law enforcement" officer (originally "Peace Officer" and should be again) directly responsible to the people and appropriately, as designed by our forefathers, directly controlled through the power of the vote by "US" - WE THE PEOPLE.

Badge Of Honor: Early type for c.1922 when first deputy was lost with number "15" for Deputies lost to date at time of dedication (2001).

Book of Justice: Physical and eternal Spiritual Justice (eternity symbol on book) memorial on Justice: 15 foot diameter circular red platform; one foot for each deputy who shed blood in making the ultimate sacrifice "to Protect and Serve" the people. 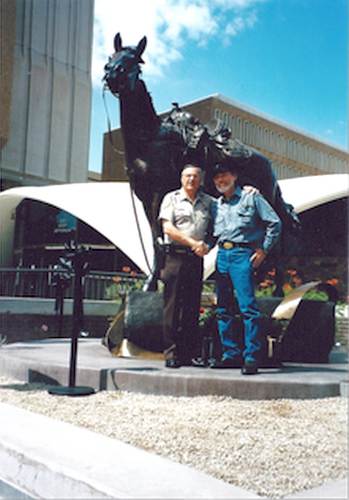 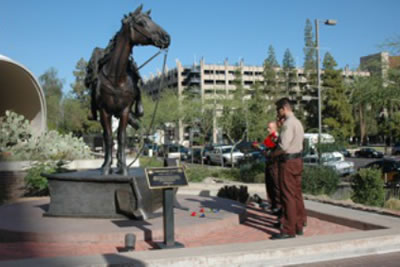 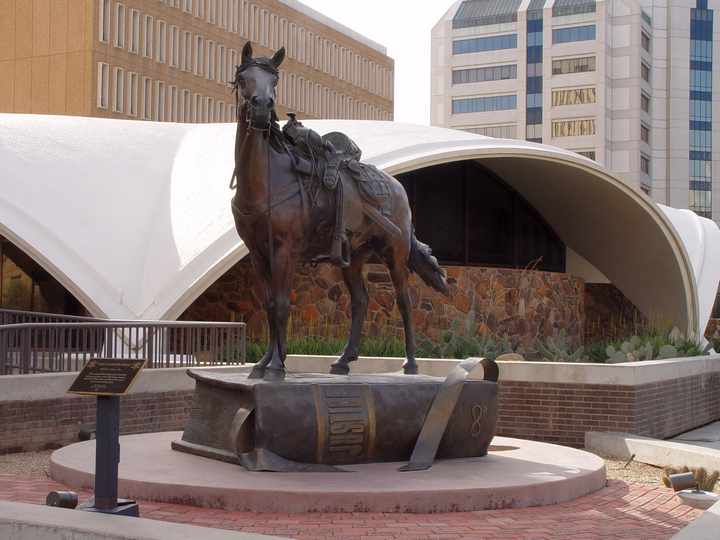