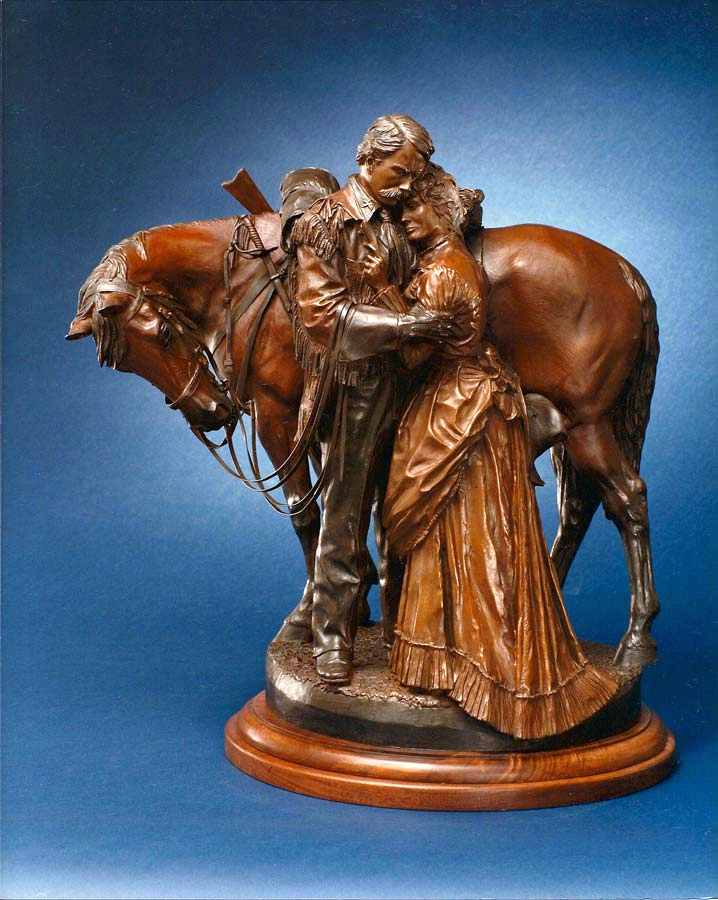 In every age, in every war, whenever men went off to fight, there have been wives and loved ones left behind. The pain of separation, already felt even as the last words are being spoken, is compounded by the ever present awareness that for a soldier there may be no homecoming. Each parting may truly be a ‘last embrace.'
This is an officer of the 7th Cavalry departing from Fort Lincoln on May 17, 1876 on the long campaign that would take him to the Little Big Horn.

Like a number of 7th Cavalry officers who followed the uniform style of their illustrious commander, this man is wearing a tape-trimmed, bib-front shirt with embroidered insignia on the collar points and buckskin scout's jacket. He holds the officer's version of the '72 folding campaign hat.
Like his men, he is armed with an 1873 Colt SAA .45 cal. Pistol on a converted sabre belt which holds approximately 50 rounds of 45-70 (45-55) cartridges for his rifle. That rifle is the 1875 Officer's Model Springfield which records indicate a number of the 7th's officers purchased and is carried in a civilian-type scabbard. Also, on his saddle is his 1860 Light Cavalry Sabre which all of the 7th Cavalry carried when they left the Fort. These were, however, crated and sent back on the boat "Far West" once they rendezvoused at the Yellowstone River on June 21st. Only two men had sabres at the Little Big Horn, one of which was left with the pack mules and the other never got a chance to be used. No sabres were used in the classic fight at all, as neither Custer, nor any of the troopers, even had them.

On his leather covered saddle is his rolled overcoat, canteen, tin cup, non-issue haversack and binoculars, a grain bag filled with 12 lbs. of oats and sidelines (leather leglets with a connecting chain) for hobbling his horse at night. The bit, on an issue bridle, is a special double-rein officer's M1859. His mount is one of the 300 thoroughbreds originally acquired when part of the 7th was stationed in Kentucky. Officers could buy their mounts either privately or from the government. This one was government property as he carries the 7th Cavalry and "U.S." brand.

His beloved wife has mustered her courage, dressed in her finest and done her best so that her husband's possibly last sight of her would be a lovely one. After the Regiment passed in review, they were halted by the Commander a final time in order that the married men could break ranks and go back for one more "last embrace" with their loved ones. A brief respite. They remounted and followed the 7th to their destinies on the Little Big Horn-some came back, some stayed forever. 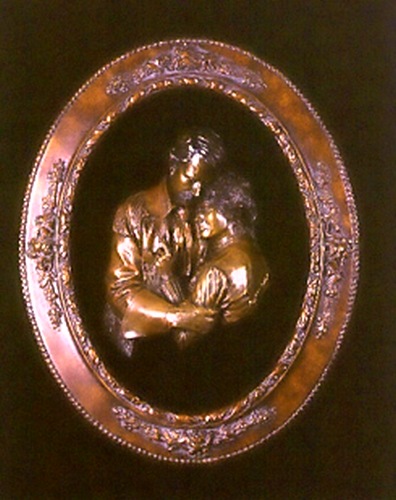