...and Justice for All a Life-size Bronze Sculpture Allegory by James Muir Bronze Allegorical Sculptor-Artist 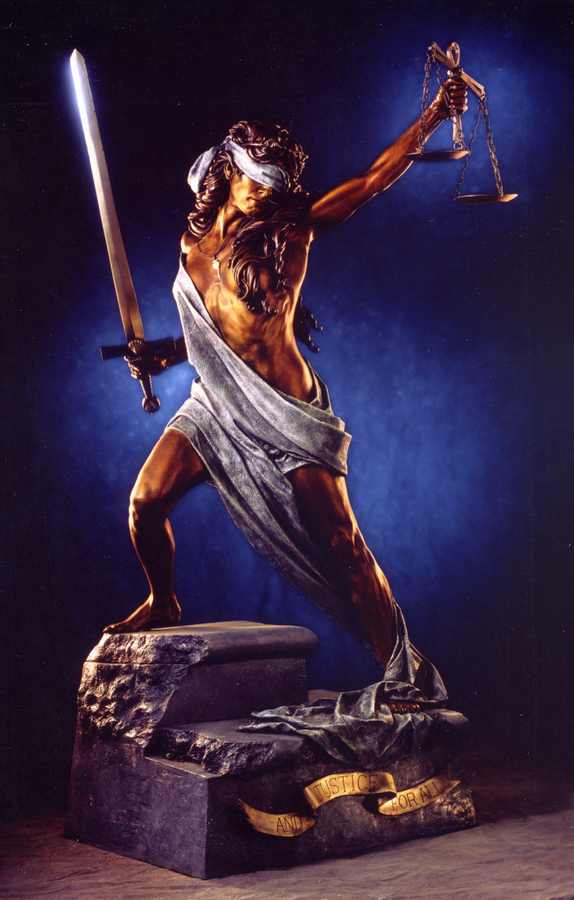 Click here to view the ...and Justice for All maquette

“…And Justice For All”

Wielding the sword of Truth, the Lady of Justice
Stands braced to defend a system out of balance.
For without Truth, Justice is lost, and without
Justice, Liberty is lost... .

". . . And Justice For All" To the people, justice is an ideal, not an instrument of Power. To the people justice is as Justinian defined it-"the firm and continuous desire to render to everyone that which is his due." But the legal system is not predominantly attentive to notions of equality and the rights of the individual. The legal system is concerned instead with law, and law is pledged to Power. As a consequence, law will most often stand against such human rights as threaten Power. The virulence of Power is not the question. By reason of Power's preoccupation with its own goals, all Power tends to function as if the system were designed to destroy the individual, for Power, by definition, can never permit itself to be subordinated to the individual. As a consequence, justice will be delivered to the people only when it is in the best interests of Power to deliver it." 1989 Gerry Spence "With Justice For None"

In the mythology of ancient Egypt, at death, the heart is weighed against the "Ma'at"..., the feather of Truth. If the heart, heavy with inequity, tips the scales out of balance, the judged-one is ferried across the river Styx to the Underworld to serve the sentence of Divine Justice. Today, the scales of social justice are tipped seriously askew and responsibility rests upon those within the judicial system to correct the imbalance before the Final Judgement is decided. While the heart above the scales denotes that all judgement must be tempered with compassion and mercy, the all-seeing eye of God suspended beneath reminds us all of the admonition that "as we judge, so shall we be judged."

The Lady of Justice, normally passive and trusting in the legal system, in her outrage has become the warrior fighting to prevent further transgression, if not her complete demise. Originally blind-folded to prevent undue influence, her "blindness" has allowed her to be violated by the very people sworn to be her guardians.

Rising as the naked truth out of the shroud of illusion, she brandishes the Sword of Justice. Although the twelve inches of the point are nicked and scarred from the battering and subjugation of our jury system at the hands of Power, the remaining twenty-four inches of Truth remain unblemished. Elusive and hidden as the pearl within its shell, Truth cannot be bought and sold, only temporarily obfuscated by falsehood. Yet all falsehood and illusion will themselves ultimately be crucified upon the cross of the omnipotent Sword of Truth when it pierces the heart in purification.

"For the Word of God is living and active. Sharper than any double-edged sword, it penetrates even to dividing soul and spirit, joint and marrow; it judges the thoughts and attitudes of the heart." (Hebrew 4:12)

The serpents entwined around the Lady's brow, one poisonous the other non, warn of the dangers inherent to those who presume to judge guilt or innocence without Truth and Justice as a supreme guide.

The steps of the courthouse, the very halls of Justice, have been eroded and chipped away at by would-be usurpers. The 12-inch foundation steps represents the ideals of trial by a jury of peers, while the 9-inch upper step symbolizes the nine Supreme Court Justices of the highest court in the land. The sanctity of both vital institutions is in serious danger of crumbling along with the efficacy of the entire judicial process without a resounding response to the cries of alarm.

Guardians of Justice, see her plight and hear her pleas; take up the weapons of Law to come to her defense. Stand by her side in mortal combat against the forces aligned against her, or perish in the struggle. Forget not your oaths to Justice.