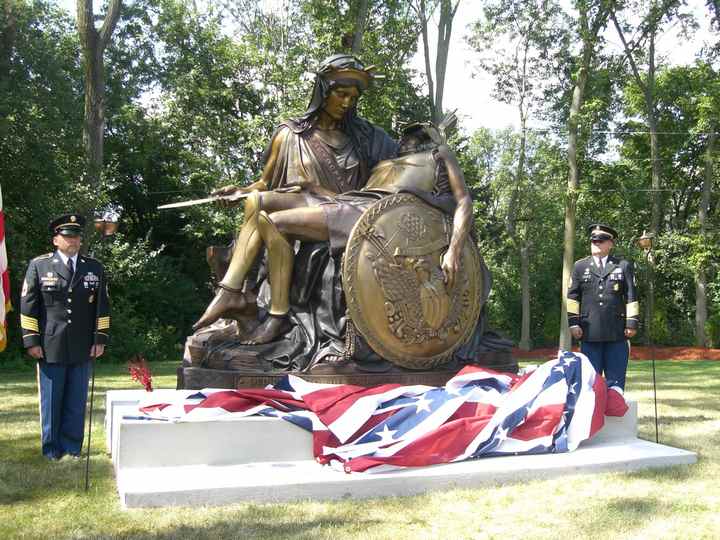 Based on Michelangelo's Pieta' of Mary and the Christ, which symbolizes the sacrifice made for Human "Spiritual" Liberty; this sculpture stands as America's symbol honoring the sacrifices made for Human "Physical" Liberty.
In this sculpture by James N. Muir, Mary has become Lady Liberty with the classical warrior lying in her arms. His shield bears the crest of the United States of America; his helmet is that of Athena, Goddess of War. The Sword of Truth and Justice that has slain tyrants, is taken from his grasp by "Liberty" to be passed on to the next courageous warrior who will step forward to take his honored place in the phalanx of Freedom...

"Oh stranger, go tell the free that
here we lie, obedient to their commands"

This Memorial is dedicated to "All American Soldiers" who have died in the never-ending battle to make men free... 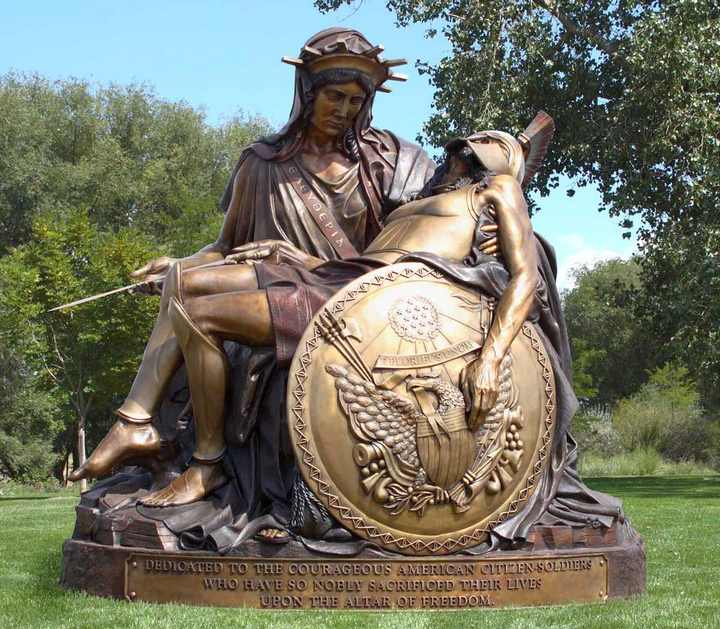 In the year 480 BC in Greece, the birthplace of modern democracy, at the Battle of Thermopylae, a small contingent of Greeks led by 300 Spartans, the masterpieces of the classic citizen-soldier, held off the invading Persian army of Xerxes. The Spartans died to the last man but Greece was saved. In tribute to their sacrifice, a rock monument was raised on the site with the inscription:

"Oh stranger, tell the Spartans that here we lie obedient to their commands"

In the year 1498 Michelangelo Buonarroti created the likewise classic masterpiece, – the "Pieta" in tribute to the sacrifice made for human spiritual liberty.

In the years of America’s founding and continuing preservation of the ideals of Freedom, thousands of American "citizen soldiers" on battlefields around the world, have made the supreme sacrifice for human physical liberty around the world. The American Pieta’ was created as a modern day tribute, and as a reminder...

The fallen elite citizen soldier ("hoplite") upon whose shield is emblazoned one of the earliest crests of the United States of America rests in the arms of the "Lady of Liberty". She takes from his grasp her own "kopis" – the "Sword of Freedom", the Sword of Truth and Justice famed as a classic symbol of slaying tyrants - to be passed on to the next courageous warrior who will step forward to take an honored place in the phalanx of Freedom. The Lady’s sword belt reads, in ancient greek, "LIBERTY".

The Corinthian helmet, the helmet of Athena-Goddess of War, which conceals the unknown soldier’s true identity will soon be removed and upon his brow will be placed the well-earned laurel wreath of "Victory".

Bottom of Monumental Base Reads:
"Dedicated to all the American Citizen-Soldiers who have so nobly sacrificed their lives upon the altar of Freedom."